Ben Dandrow, Executive Director of the Dahlem Conservancy shared the following speech with the Jackson Community Foundation and the Dahlem Board on January 21, 2022:

“I first met Myrna Berlet in June 2016 shortly after being named Interim Executive Director. After our initial meeting, we had many office conversations where I learned many things about Myrna and the Dahlem Conservancy which she loved and dedicated over half of life nurturing.

I learned that she was a dedicated, passionate environmentalist who had a deep love of nature and the animals in it. She had a deep concern for the harm she perceived that was being done to the environment by people and organizations that did not share her passion for the care and conservation of our planet and its natural resources. Her love for the beauty in nature and its animals were captured vividly in the films she produced with her late first husband Walter Berlet.

Myrna was a passionate and dedicated educator. She graduated with a B.S. in biology and a M.S. in Zoology from the University of Michigan. She retired from Jackson Community College in 1998 after a distinguished 32 year teaching career where she shaped student lives and career choices for the betterment of society because of her pedagogical skills. She remained an educator to the very end of her life. Dahlem’s very successful Little Acorns preschool is a living testimony to Myrna’s vision of educating and instilling in the very young the love and reverence for nature.

Myrna had a deep abiding love for Dahlem. She passionately loved the beautiful 300 acres that make up the Conservancy and was a guiding force for over 50 years in its mission of providing Environmental education and outdoor experiences to the residents of south central Michigan. In 1971, her Biology Class cut the first trail on the property. In 1973, she developed an Interpretive Master Plan, while teaching an Environmental Problems Class that led to the establishment of the nature center that became known as Dahlem in 1976. In 1977, Myrna was appointed to serve on the first Dahlem Board of Directors.  During the next 44 years Myrna served in many capacities and positons as a board member, a board officer, an advisor on environmental and conservations matters, and a dedicated volunteer for various Dahlem sponsored events. The Dahlem Board of Directors in 2015 named her as a Board member Emeritus in recognition of her contributions and years of service.

The Dahlem Conservancy is incredibly thankful for the memory and contributions of Myrna Berlet. Through her steadfast support, Myrna expressed her confidence in Dahlem’s important role in nurturing the love of nature in people of all ages. She not only gave her time, services, and talents but was a generous financial contributor during her lifetime, donating nearly a quarter of a million dollars. Her support of Dahlem did not end with her life but will continue into posterity. Myrna Berlet’s endowment will ensure the continued sustainability and growth of The Dahlem Conservancy.

It is with a deep sense of gratitude that Dahlem accepts the first payment from the Berlet Fund for Nature at the Dahlem Conservancy that will be held in the Jackson Community Foundation; and that we announce that Myrna will be the first entrant in the newly created Dahlem Conservancy Founders Circle recognizing those who have remembered Dahlem in their estate and trust planning as Myrna did.” 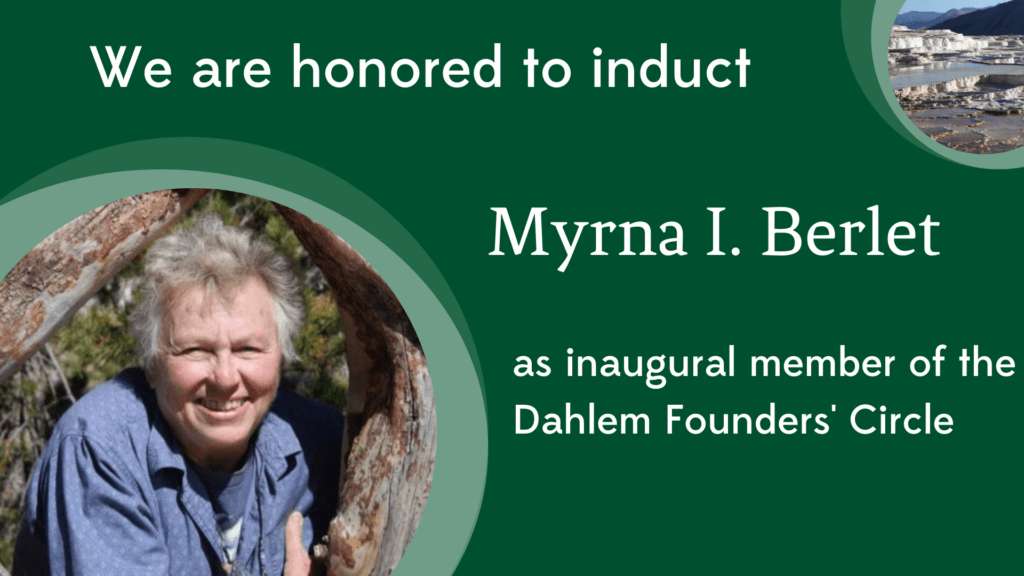 If you are interested in following Myrna’s example and making a planned gift to Dahlem, or if you have already included Dahlem in your estate, the Dahlem Founders’ Circle is our way of recognizing this special form of generosity. We are so grateful to everyone who has made Dahlem part of their legacy.

Planning a gift that will define your legacy at Dahlem is an important, sensitive conversation. Please connect with Margaux Dever, Development Director so that we can learn how Dahlem can meet your needs for your desired legacy. We would love to share more about the Dahlem Founders’ Circle with you and your loved ones.